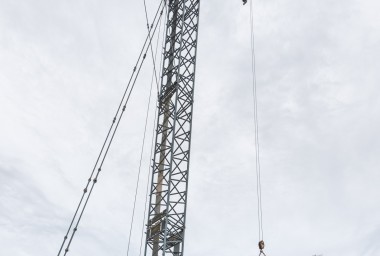 The $165 million project led by ICL – which has, thus far, involved the demolition of an entire city block, and work to establish an inner-city retail and business precinct – has now reached its critical halfway mark.

TW Events & Incentives hosted the project’s “halfway function” at The Handle Bar at Classic Motorcycle Mecca (the venue has a stellar bird’s eye view of the development, located just across the road). At the event, a number of key retailers were announced: including Amazon, Glassons, and Hallensteins among them.

They come in addition to retailers previously named as set to move into the new retail space: Starbucks and anchor tenant Farmers.

From a construction point of view, one of the most important parts of the CBD rebuild has been erected. A 54-tonne steel K-frame have been hoisted into place: It’s the largest ever used in the city, and will provide the main seismic support on the Tay St side of the new commercial precinct’s car park. With a height of 15m and a width of roughly 12m, the frame was installed by a crew of 14 and two cranes.

Invercargill’s inner-city redevelopment is expected to be completed by Christmas 2022. The project is one of several significant developments happening in the city: work is also progressing at both the Langlands Hotel build and the Southern Institute of Technology’s new Centre of Creative Industries.